While on tour to support his new album View with a Room, Julian Lage invited PG’s John Bohlinger to his soundcheck at Brooklyn Bowl Nashville to share his insights into why he likes a straightforward rig and “honest” tone.

When it comes to jazz virtuoso Julian Lage, you’d be hard-pressed to find an electric guitarist who uses less gear. “Any time I’ve [used too much equipment], there’s an awkwardness where I’m still grappling with the fact that I play here,” he says, gesturing to his guitar, then gesturing to his amp, “but the sound comes out there.” He continues, “It sounds like a joke, but it’s been a struggle for me. Any time there’s layers or filters or anything, I feel dissociated.” Of course, Lage’s rig, which buoys his clean, no-frills tone, makes sense for a musician like himself—whose playing often comes across fluidly, and as gently as his personality.

On View with a Room, Lage’s second release on the hallowed Blue Note Records, he’s offering a fresh, bold continuation of the conversation he’s created over the years. The album features his latest ensemble, made up of himself, bassist Jorge Roeder, and drummer Dave King—but this time, he’s added the legendary Bill Frisell. Together, the musicians help to expand Lage’s body of work with performances of 10 of his original compositions.

While on tour for the album, Lage invited PG’s John Bohlinger to the soundcheck before his show at Brooklyn Bowl inn Nashville to share his insights into why he likes a straightforward rig and “honest” tone. In the interview, Lage elaborates on his three main guitars (his Nachocaster, Collings signature, and ’55 Les Paul), explains why he prefers low volume on his amps, and offers a remarkably brief tour of his pedalboard.

Brought to you by D’Addario XS Strings. 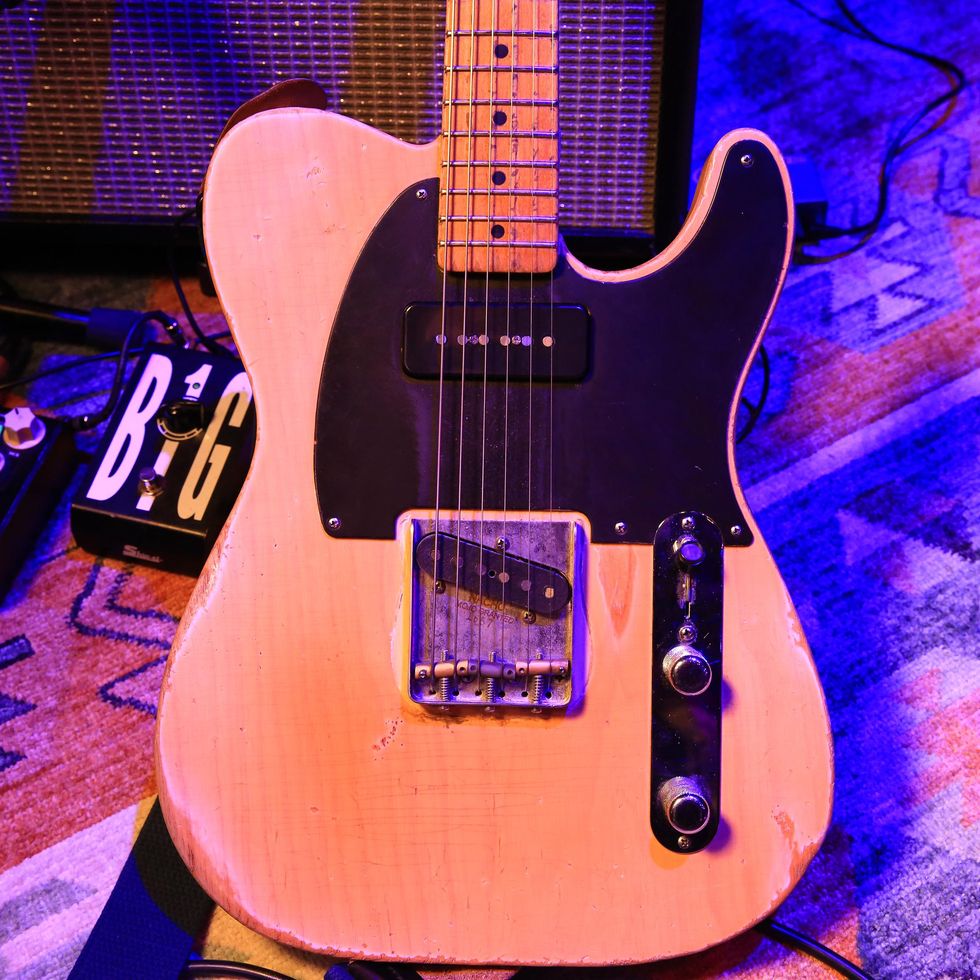 As a bit of an anomaly in the world of jazz guitarists, Lage prefers Telecasters. His number one T-style is his Nachoguitars 1657 “Nachocaster”—a saffron-colored guitar equipped with an Ellisonic P-90-size neck pickup and Fatpups Blackguard bridge pickup, built by Spanish luthier Nacho Baños. However, Lage states that he never changes from the neck position. The Ellisonic pickup, which was created by Ron Ellis for Lage’s other primary instrument, the Collings Julian Lage 470 JL, captures the clarity and acoustic-like feel of vintage single-coils. The guitar is strung with D’Addario Flatwound Electric ECG24 Chromes (.011-.050) with a .020 unwound G string. Lage also uses Tortex .88 mm picks. 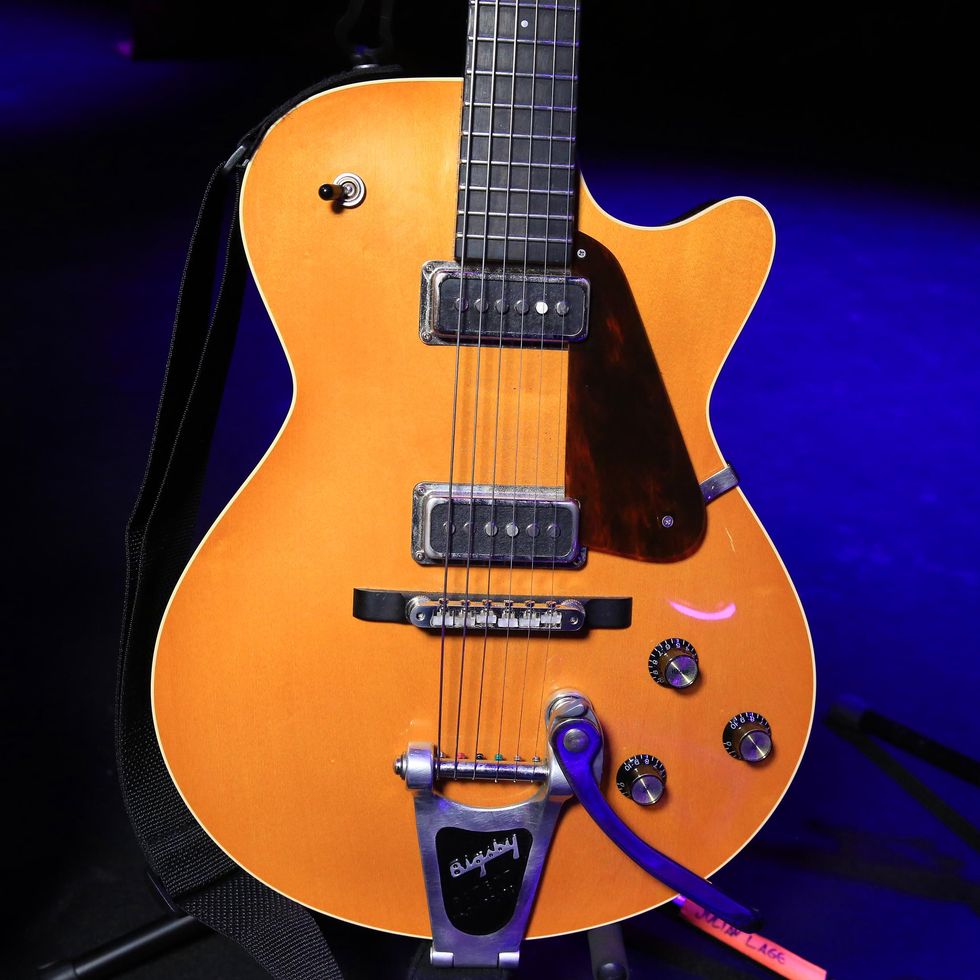 The Collings 470 JL signature was built as a collaboration between Lage and Collings. It features a solid Honduran mahogany body with a laminated maple top, Ellisonic pickups, and a Bigsby B3 tailpiece. He shares that the Bigsby was added mainly for weight, as the guitar was 5 lbs. before its addition and 6 lbs. after. “That gets you right to this place where the fundamental is still there, and you have this brilliant overtone,” says Lage, who adds that much like the bridge pickup on the Nachocaster, he doesn’t touch the Bigsby. He strings this guitar with .011-.049 D’Addario flatwounds. “Honestly, I think it’s more of a rock machine than anything,” he adds. 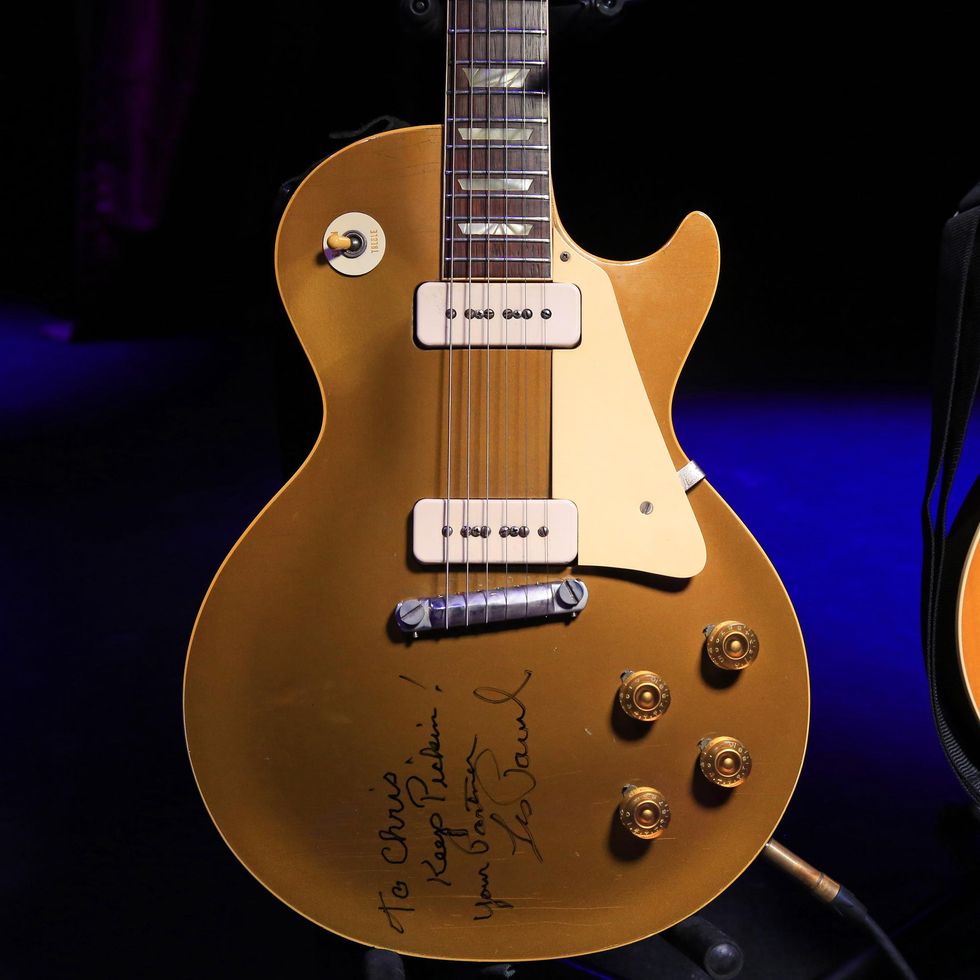 Lage’s 1955 Les Paul goldtop was a gift from Spinal Tap’s Christopher Guest, and sports the actor/guitarist’s signature. “I feel very much like a steward of it,” Lage says of the guitar. “I’m learning how to play it constantly. It’s so luxurious. Anything’s possible, so it really comes down to what do you hear, what do you want to play, what’s the voice of the music … and this guitar will be 8,000 percent there for you.” 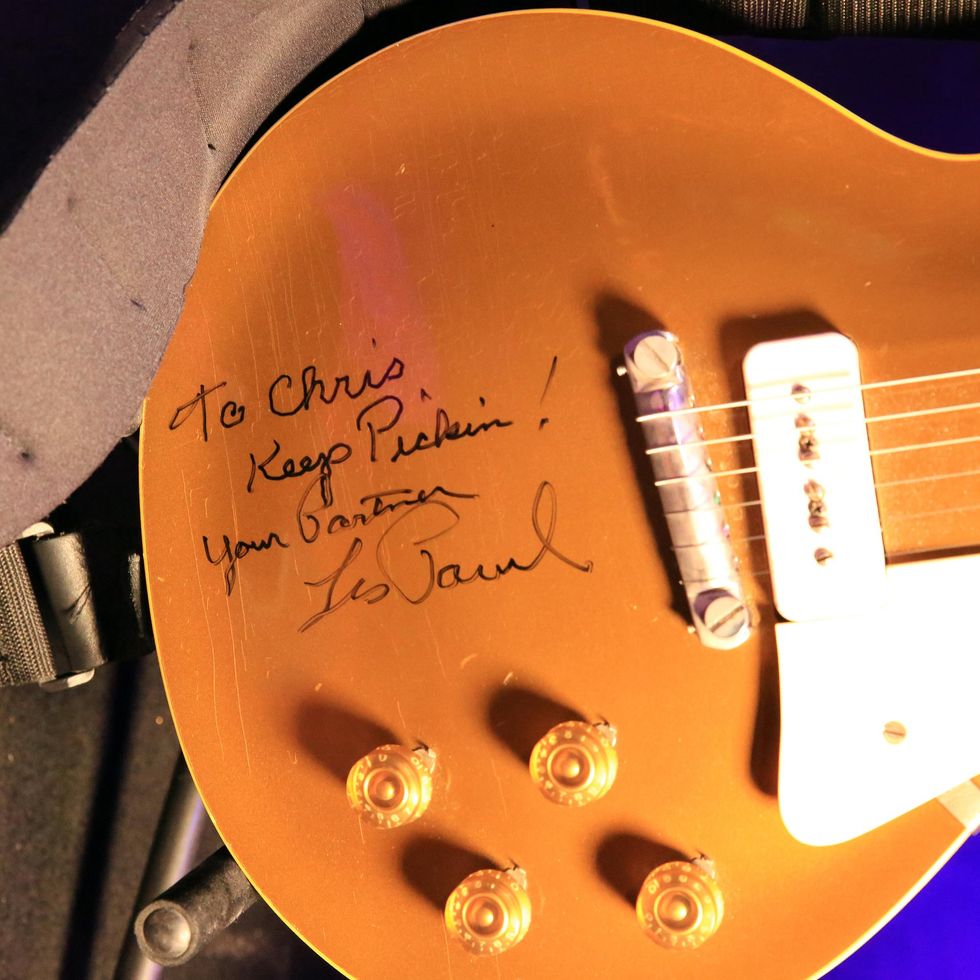 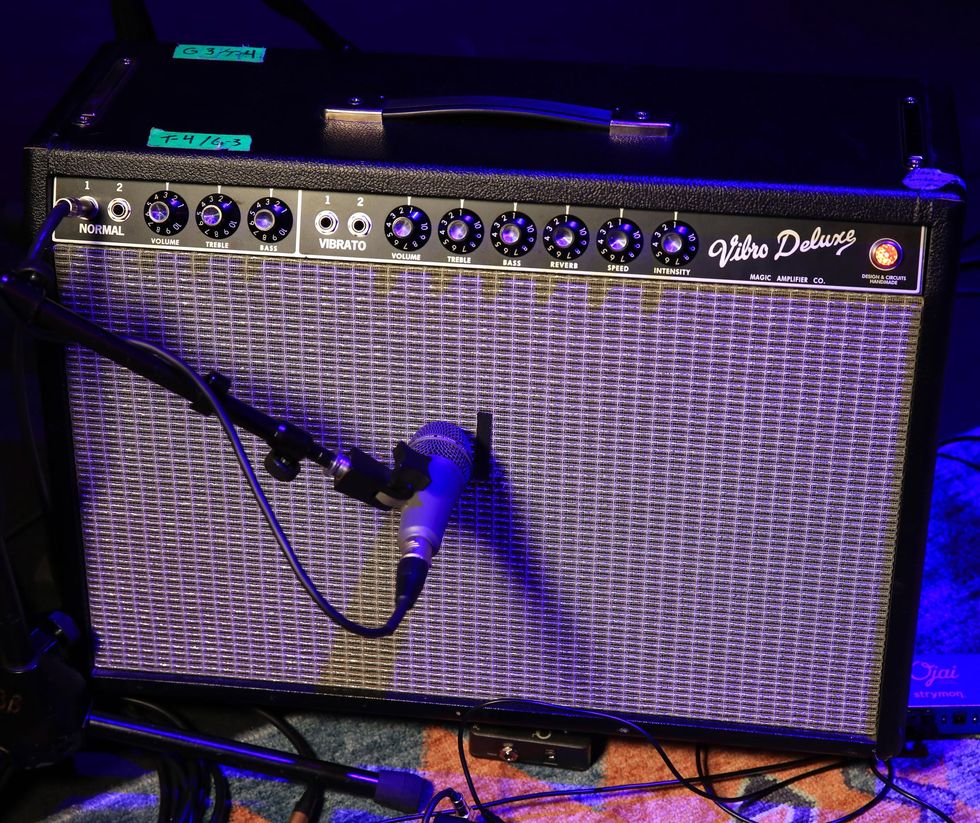 Lage is a longtime fan of low-watt, vintage Fender amps, in the past having remained ardently loyal to his Fender Tweed Champ, until it became impractical to bring it everywhere. On this tour, he’s playing a Magic Amps Vibro Deluxe, reminiscent of a 1964 Fender Deluxe Reverb. He plugs into the normal channel and sets his volume to 3, treble to 2, and bass to 2. As he describes, “This one has this miraculous thing where it feels like it’s being pushed at a lower volume. It’s not terribly interesting, but it is what I do.” 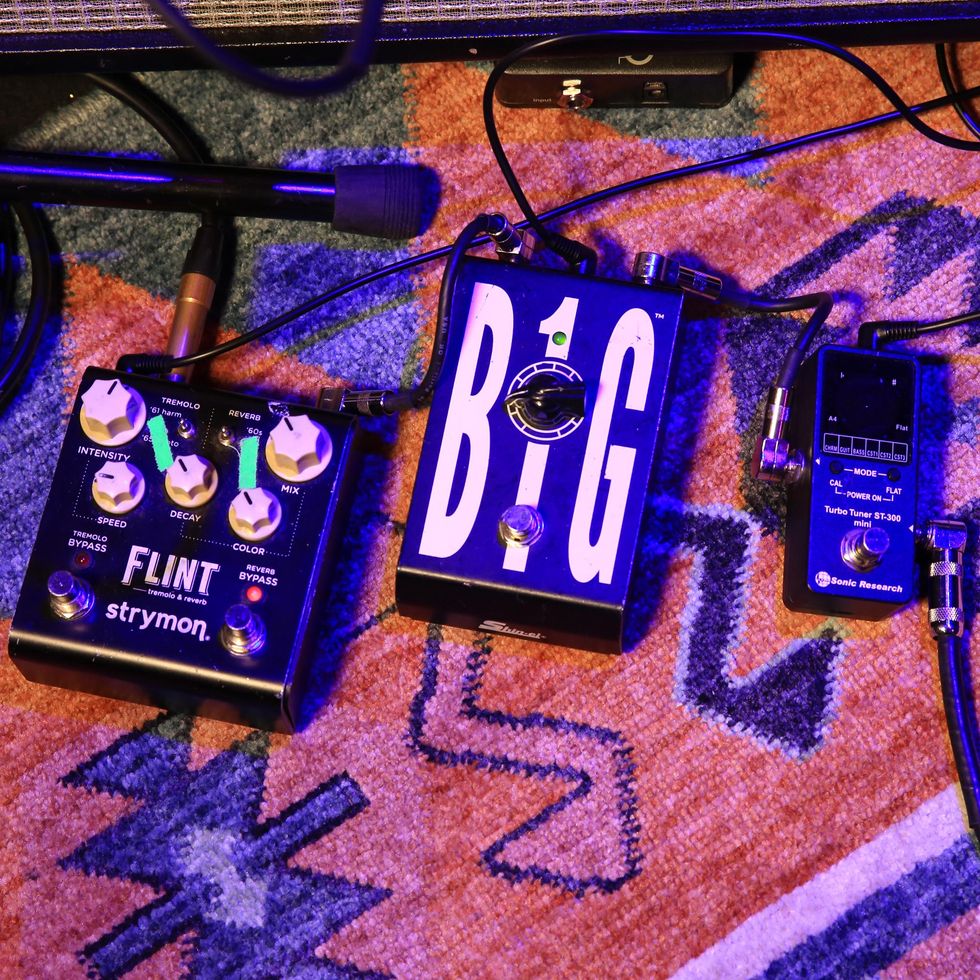 Panic! At The Disco disbands after nearly 20 years

Author miyuruPosted on January 20, 2023
Get racing! by Liam Doolan 2 hours ago First 4 Figures have put out some absolutely stunning Nintendo statues in the past, and this...
Read More

Author miyuruPosted on February 1, 2023
No band has had more pages written about them than the Beatles. There are books that examine every day of the band’s history, large...
Read More

SimpliiGood, Haifa tie-up will be ‘transformative’ for sustainable spirulina

Author miyuruPosted on February 1, 2023
SimpliiGood and Haifa have entered into an agreement to co-pioneer sustainable closed-loop spirulina production, through a circular economy partnership that they say will strengthen...
Read More